Life as Politics: How Ordinary People Change the Middle East 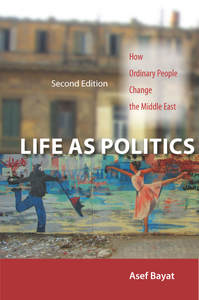 Prior to 2011, popular imagination perceived the Muslim Middle East as unchanging and unchangeable, frozen in its own traditions and history. In Life as Politics, Asef Bayat argues that such presumptions fail to recognize the routine, yet important, ways in which ordinary people make meaningful change through everyday actions. First published just months before the Arab Spring swept across the region, this timely and prophetic book sheds light on the ongoing acts of protest, practice, and direct daily action. Click here for more.